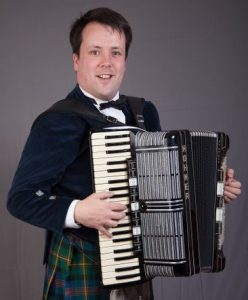 Matthew has been playing Scottish music since he first started playing the accordion at the age of seven and has been playing for functions regularly since he was 15, with different bands as well as his own band and as a soloist. Matthew plays at the “Taste of Scotland Show” in the Prestonfield Hotel during the summer.

← Keith Dickson Claire Campbell →
We use cookies on our website to give you the most relevant experience by remembering your preferences and repeat visits. By clicking “Accept All”, you consent to the use of ALL the cookies. However, you may visit "Cookie Settings" to provide a controlled consent.
Cookie SettingsAccept All
Manage consent