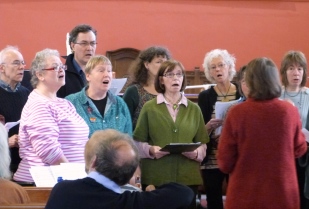 Mary comes from a singing family in Ayrshire (lots ofold Irish and Scottish songs), sang harmony to Buddy Holly on the school bus, and re-ignited a love of singing in Eileen Penman’s “Women and Folksong” class at SMG. She has been a tutor in community singing groups and workshops with the Scots Music Group for 18 very enjoyable years, and has also taken part in Scotland Sings songleader training workshops with Ali Burns and others. It is very rewarding to see people gaining confidence, enjoying singing and discovering the wealth of Scots traditional songs. A member of Sangstream choir, her interests are:song in the family and the community, song booksand collecting songs, and going to workshops/folkfestivals/traditional singing weekends. She is also amember of Protest In Harmony choir. She loves traditional singing especially in social gatherings and enjoys practising a favourite song to do a turn. She also writes songs and sets poems to music and would like to do more of this. In the last five years, with the support of SMG and volunteers from the Sing Together class, she has been leading Scots song workshops such as Midwinter Songs, Ballads, Song Leading and Summer Songs, and helped to produce two SMG trad song books